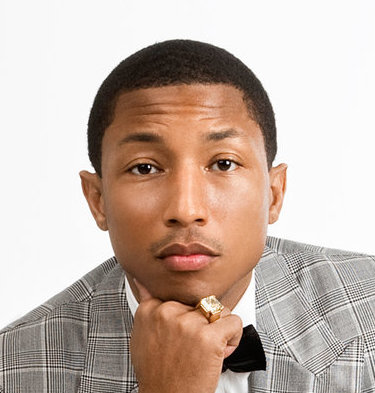 “Running water has always been a portal for me, creatively,” he says. “Sensory deprivation will do it. When you hear water over and over again. Or when you’re on a plane and you’re hearing the air. All of a sudden one part of your mind focuses on that and the other side, your imagination, just runs wild. It just allows for things to come in. You have to distract the ego.”

Whatever his impact on global water scarcity, Williams has made up for it with a steady stream of musical gold. With his producing partner Chad Hugo – and, more recently, without – he has written and produced some of the biggest tracks for the biggest names in R&B, rap and pop for nearly two decades, including Britney Spears, Justin Timberlake, Gwen Stefani, Jay-Z, Snoop Dogg and Beyonce, to name a few.

His latest incarnation is as a composer and producer on Hidden Figures, one of nine films vying for the best picture Oscar at this year’s Academy Awards. The film tells the true story of three female African-American mathematicians at the NASA Space Task Group in the 1960s, overcoming racial and gender divides to play pivotal roles in the space race.

Coming at a time of heightened awareness of race and gender issues in America, the feel-good film has been embraced by critics and audiences, earning $US60 million in its first 10 days of wide release and scoring three Oscar nominations.

“These women were African American females in the 1960s, where the gravity was much heavier on black people and even heavier on black women,” Williams says. “You couldn’t even wear pants as a woman. But they superseded their situation. Those women banded together and they did something that not only helped them but can help the world.”

Though he won’t be drawn on the impact of Donald Trump’s presidency on race relations in America, Williams describes Hidden Figures as a rallying cry for our times. “If they can do that in the 1960s, then women can do that in 2017 and beyond. That can happen right now and I think it’s going to happen. Mankind hasn’t given them a chance, but women are starting to galvanise, and it’s going to be beautiful.”

It’s a typically upbeat pronouncement from the man whose 2013 hit Happy became an anthem for optimists the world over. Williams wrote, produced, sang and performed all the instruments on the bliss-inducing pop smoothie, which topped weekly and year-end singles charts in 26 countries and featured the word “happy”, recited like an incantation, more than 50 times.

Accompanied by a star-studded music video, the song cemented Williams’ reputation as a poster boy for positivity – a reputation he easily lives up to in person. “I just do what feels good to me,” he says. “It just ends up being encouraging, feeling positive. That’s just the kind of stuff that I like … music that makes me feel good.”

Describing himself as a Christian on paper but a “universalist” in practice, there’s more to Williams than a sunny disposition. During our interview in New York to promote Hidden Figures, he has the tranquil air of a mountaintop guru — all contemplative silences and profound, koan-like pronouncements. He believes all musicians are synesthetes (“Ask ’em. You’ll be surprised”), likens his philosophy of producing to being a magic mirror (“But a mirror can’t see itself in the mirror”) and compares the sensation of finishing a song to finishing a meal (“No different”).

Williams lives in Los Angeles with his wife Helen Lasichanh, a former model, and eight-year-old son, Rocket. (Earlier this year, after our interview, the couple had triplets.) Draped across a sofa in a hotel suite in midtown Manhattan, he looks impossibly young for his 43 years, and every inch the pop star-fashion designer once named best-dressed man in the world by Esquire. There’s no sign of the monumental Vivienne Westwood Mountain hat he wore at the 2014 Grammys, but he is wearing a marshmallow-pink sweater with a pair of white Chanel sunglasses dangling from the neckline, plus HG-Star Raw Elwood X25 collection checked jeans and Timberland boots. (When our time is up, he will throw on his Vanson skeleton-design biker jacket and head for the door.) He has just flown in from Paris, having made his modelling debut at Chanel’s Metiers d’Art show.

In his multifarious collaborations and ventures – his empire includes a clothing line, a record label and a web channel – he prefers to hire women for the top jobs. “Just good energy, man,” he explains. “To have that female sixth sense around you, to bounce things off of, has been a blessing.”

He did, however, earn the ire of some women who accused him of endorsing rape culture over the contentious lyric “I know you want it” in the 2013 track Blurred Lines, which he co-wrote and produced. The song also gave rise to a $US7.4million lawsuit after Williams and singer Robin Thicke were found guilty of copyright infringement in a case brought by the notoriously litigious estate of Marvin Gaye. The pair have since appealed the finding.

At the mention of that unpleasantness, Williams plunges into a searching silence. Finally, he raises his head, looking as wise and unperturbed as ever. “I’m blessed to be able to do what I do every day,” he says. “Music has been the skeleton key that’s opened up every door for me. Including this situation. I concentrate on my gratitude, the opportunities my career’s afforded, and the universe which opens the doors for me. Regardless of the good or bad, you just have to keep that on top of your mind.”

Before working on the soundtrack for Hidden Figures, Williams was involved in the scores for Man of Steel (2013) and The Amazing Spider-Man 2 (2014), working with film composer (and former pop producer) Hans Zimmer. “Hans has been a big brother to me and a mentor to me all at once,” Williams says. “I never tire of his way of looking at filmmaking and storytelling … he always looks at the … poetry of a script, and he always has this uncanny ability to pair it with what the score does. It’s amazing.”

The Hidden Figures score, a collaboration between Williams, Zimmer and Benjamin Wallfisch, has the punch-the-air patriotism of an Aaron Copland composition, with a soulful Miles Davis twist. Female voices abound – at Williams’ insistence, the orchestra comprised as many female and African-American musicians as were available – and jazz luminary Herbie Hancock makes a musical cameo.

Williams’ contribution to the sound of the movie is most keenly felt in its pop numbers. In a recurring scene, one of the women makes a long, frantic journey to a segregated bathroom. The scene is set not to earnest orchestral music but to a groovily upbeat Williams number called Runnin”, conveying a mood of unflappability in the face of adversity: “I know they say you crawl ‘fore you walk / But in my mind I already jog / If I stand still I cannot get far / They want the Moon, I’m on Mars.”

Growing up as a drum-playing kid in Virginia Beach, southeastern Virginia, it was Williams’ grandmother who first recognised and nurtured his musical potential, encouraging him to join the school band and go to summer band camp, where he met Hugo.

His first music purchase was A Tribe Called Quest’s 1990 record, People’s Instinctive Travels and the Paths of Rhythm. The look of the compact disc itself is burnt in his memory (“it was purple,” he says, smiling fondly). There was a lushness and playfulness to the record that would be a big influence on Williams’ own musical outlook. His classmates were more into the harder-edged, politically charged music of Public Enemy, Ice-T and NWA.

“It was nerdy in comparison to what everybody else was into at the time,” he says. “The gangsta stuff. Which was dope. We loved that. And hardcore rap records at that time. But I mean” – Williams points at his top – “I have a pink sweater on right now. You know what I’m saying?”

Discovered by a talent scout at a high school show when he was 18 – he rapped while Hugo beatboxed – Williams made the acquaintance of the American music charts within the year, co-producing and penning a verse for Wreckx-N-Effect’s Rump Shaker.

He released his first solo single, Frontin’, in 2003, but despite his success as a solo artist, he still considers himself primarily a producer and behind-the-scenes collaborator, doing his best work when supporting someone else’s vision.

“Serve the task, serve the people, serve others when you can,” Williams says. “That’s when it becomes fun for me. Because it’s not about me. My best work is when I’m collaborating with someone or I have an objective that doesn’t really involve me, when the work is bigger and better than you. I don’t like to take credit.”

The easy and breezy Happy was itself the product of a lot of hard work to satisfy someone else’s brief for the film Despicable Me 2: Williams wrote and recorded more than half a dozen totally different tunes before striking pop gold. He seems more astonished than anyone by the song’s impact; in 2015, he was dubbed ambassador for the United Nations’ International Day of Happiness and addressed an audience of young people at the UN’s General Assembly Hall.

“When you find out what makes you happy – and it can be as simple as a long-term goal or … the way I feel when my son smiles – you should know that happiness is your birthright,” he told them.

“It was nice to support the cause,” Williams says now. “I liked that the attention that day was on the song and not on me.”

After all his success, there’s something blessedly simple about his deepest pleasure: the irresistible thrill of a killer chord progression or melody. “There’s no feeling like it,” he says. “When you’re like: Whoa. That’s amazing.” He mimes pressing ‘play’. “Play that again.”

This feature originally appeared in the Sydney Morning Herald in February 2017.