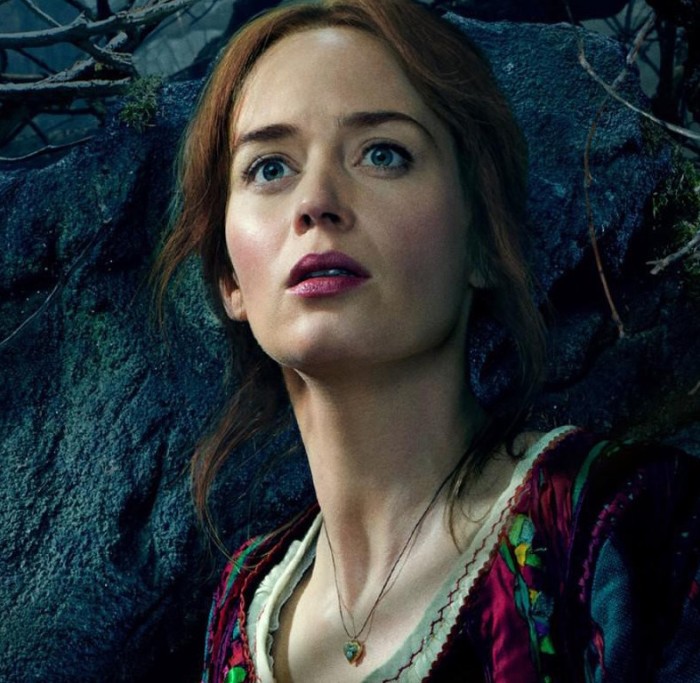 Benevolent fairy godmother that she is, Hollywood has been eager to sprinkle movie magic all over Stephen Sondheim’s fairy-tale mash-up musical Into the Woods for a while now. At various times, the likes of Robin Williams, Martin Short, Steve Martin, Neil Patrick Harris, Cher, Carrie Fisher, Kyle MacLachlan, Elijah Wood, Danny DeVito, Julia-Louis Dreyfus and Janeane Garofalo have been attached to possible movie projects.

Now, at last, moviegoers can look on as a lavishly costumed mostly-star cast – including a bewigged Meryl Streep and a bewhiskered Johnny Depp – traipse around a spooky greenhouse, accompanied by a 72-piece orchestra, in a production with all the Technicolor slickness of a Disney-themed Annie Leibovitz celebrity photo shoot.

But if you happen to prefer the thought of an Into the Woods that is equal to the ingenuity, the subversiveness and spirit of the source material – Sondheim’s cruciverbally witty lyrics and elegant melodies, the impressive narrative architecture of James Lapine’s book – you’re better off venturing into the theatre than the cinema.

Classical theater troupe Fiasco Theater is currently staging a radically stripped down interpretation of Into the Woods at Roundabout’s Laura Pels Theatre in New York. It turned out not to have been that much of a departure for a company more accustomed to tackling Shakespeare.

“When we decided to do a musical, Into the Woods immediately came to the fore,” says co-director Noah Brody. “It’s very Shakespearean in its scope, in its physical elements, in its storytelling dynamism – it feels like a big Shakespearean play. And as soon as we started working on it we realised it was the right fit for us.”

Fellow co-director Ben Steinfeld agrees: “In some ways it was an experiment we wanted to run, to see what would happen if we brought our ensemble approach to building a Shakespeare play to making a musical. I think our perspective on our musical is different than a lot of other people’s starting point.”

Next to the Disney treatment, Fiasco’s approach has the appearance of running on the whiff of an oily rag. Flapping pages of sheet music double as Cinderella’s birds, Rapunzel’s tower is a stepladder, Little Red’s wolf is Brody wielding a taxidermic head, and the booming voice of the Giant comes out of a megaphone. Jack’s cow – always and infamously dodgy in community theatre productions – is played by an actor wearing a cowbell.

There’s a lo-fi, DIY spirit to the music too. Most of the score is performed on a sole upright and onstage piano, with the actors occasionally contributing parts on instruments scattered around the stage. When an actor performs the Princes’ Fanfare on a solo trumpet, the squeakiness is perfectly appropriate for a Prince Charming (Brody, again) buoyed by hot air. All this on a set made up to resemble something out of Antiques Roadshow.

The whole approach of course contrasts considerably with the spectacular literalness of the Disney version (which neither Brody nor Steinfeld have seen – that would be tantamount to visiting a nursery while in the middle of delivering your own baby). But Fiasco also set themselves apart from a lot of theatre out there, especially of the musical variety, which asks nothing more of its audience than to sit back and passively take it all in.

“We want to break down some of the expectations and tropes of what going to the theatre means,” he says, “where the audience sits in the dark and the actors are up on the stage and in the light and we all pretend we can’t see each other. The idea of spectacle in theatre has grown and isolated the audience from the production more and more. It sends the message that, not unlike a movie, you can disengage your imagination because we’re going to do it all for you.

“We’re trying to go 180 degrees in the other direction. We’re going to provide what you need, but only what you need to meet us halfway, and your imagination will do the rest of the work. And we will be experiencing this all together in this room as a community. We want to reinforce the idea that the play is happening within these four walls, that we’re all breathing the same air, that we see each other, that we hear each other.”

The result is a different and altogether deeper sort of intimacy, clearly, than the kind achieved with a super-duper close-up of Emily Blunt’s porcelain features.

And Sondheim is right behind it.

“He seems to understand what we’re trying to do,” Steinfeld says. “It speaks to his artistic openness and creativity that, after all this time and after all his achievements, he’s still interested in how an audience might experience something anew and how it might be made afresh.”

Ultimately, it’s obvious that whatever particular freshness Fiasco brings to their Into the Woods, it’s at the service of Sondheim and Lapine’s creation – which some would say shines through more brightly in this mode than ever. Kinda makes you wonder why anyone ever wished for a movie version in the first place.

“We do it to let the audience experience what these guys have put together, which is ingenious on so many levels,” Steinfeld says. “Whatever choices we’ve made are about highlighting the material itself.”

This interview originally appeared in the Guardian in January 2015.