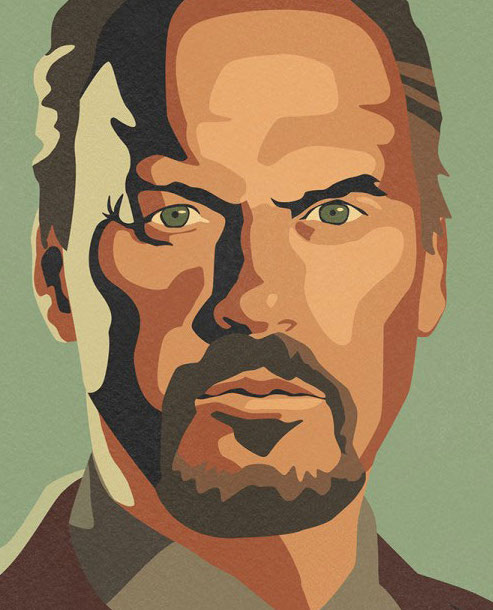 Much has been made of the fun that “Birdman, or the Unexpected Virtue of Ignorance” pokes at the movie business. You’re less likely to hear that part of what makes “Birdman” so intriguing is how closely it resembles a work of theatre.

In the film Michael Keaton—who once famously played a caped crusader—plays Riggan Thomson, an actor primarily famous for having once played a caped crusader. Riggan hasn’t been able to move on in the years since being Birdman. And that fictitious avian avenger haunts him in a much more intrusive sense—his gravelly growl is the voice, or voice-over, of Riggan’s darkest thoughts. These days Riggan is looking less heroic, and he is bitter about the latest crop of superheroes inundating movie screens. In a desperate attempt to claw back his career and credibility he is directing and starring in an overblown Broadway adaptation of the Raymond Carver short story, “What We Talk About When We Talk About Love”.

“Birdman” is both very funny and sharply perceptive about the theatre and its natural inhabitants. Mike Shiner (played by Edward Norton), a hardened thespian whose dedication to onstage verisimilitude extends well beyond the bounds of professionalism, is an instantly recognisable creature of the theatre. More strikingly, the film captures the mood of live performance. When we witness Riggan’s play, we are enveloped in the glow of stage lights, and the temperature of the film shifts as if we are entering Riggan’s subconscious.

Alejandro González Iñárritu, the director, is best known for “21 Grams” and “Babel”, films whose narrative cogs interlock like ingenious machinery. But where those felt like clever juggling acts, “Birdman” feels more like an exhilarating high-wire stunt. With Emmanuel Lubezki—who specialises in extended one-take shots employed to dazzling effect in “Gravity” and “Children of Men”—Mr Iñárritu unfurls “Birdman” in one unbroken tracking shot, trailing Riggan on his winding path onstage, backstage and around New York’s theatre district.

A similar technique was used to grand, hypnotic effect in “Russian Ark”, but the odyssey we undertake here is far more intimate and voyeuristic. Aside from the occasional detour, the camera is fixed on Riggan’s downward spiral in the days leading up to his play’s opening night. The intimacy of the tracking shot also ensures the film’s interplay between the actual and the imagined is all the more compelling and fluid. When Riggan encounters a Shakespearean soliloquist on the street reciting ‘Tomorrow and tomorrow and tomorrow’ from “Macbeth”, we are unsure whether or not this is a product of his own existential anxiety.

Just as impressive is the deft plotting, scene transitions and meticulous choreography of the performers. Though undeniably cinematic, the overall aesthetic makes us keenly aware of real bodies interacting in space, of one scene bleeding into the next, just as we are when watching a play. Even the palpitating percussion soundtrack by Antonio Sanchez, the drummer, becomes part of this sense: twice in the movie Mr Sanchez himself materialises, pounding on his drum kit.

Late in the film, Riggan imagines himself in the midst of a bloated summer blockbuster, hallucinating explosions and CGI beasties. With “Birdman”, Mr Iñárritu has demonstrated how the latest in cinematic trickery can be used, not only to conjure that kind of digital razzle-dazzle, but to enhance drama on a human scale. Just like a fine piece of theatre.

This review originally appeared in the Economist in October 2014.